Pascale Cossart’s work on the bacterium Listeria monocytogenes has been instrumental in expanding the molecular understanding of intracellular parasitism and disease mechanisms. She is currently an emeritus visiting scientist at EMBL Heidelberg, working with the Typas and Heard groups. Here, she discusses her fascination with this little parasite, her thoughts on the frontiers ahead for the fields of infection biology and microbial ecosystems, and her long association with EMBL.

How did you first get interested in Listeria and what makes it an ideal model system to study host-parasite interactions?

I was introduced to the mysteries of Listeria by a friend, Patrick Berche, who had spent a sabbatical year in immunology with Robert North at the Trudeau Institute near New York. At the time, Listeria was – and still is – an outstanding model to study the T cell immune response to intracellular bacteria.

I had realised in the late 1980s that while several extracellular pathogens were beginning to be studied at the molecular level, this was not really the case for intracellular pathogens. Listeria monocytogenes was an exceptional model to study host–intracellular pathogen interactions. First, while it generates an interesting disease, it is not too pathogenic, and one can work in L2 conditions. Second, it grows fast. Third, it belongs to a genus that contains both pathogenic and non-pathogenic species, so one can make comparisons to draw conclusions. And finally, Listeria infects many tissue-cultured cells, as well as guinea pigs and mice, so one can mimic human infection under laboratory conditions.

Of course, now, our knowledge of this organism has dramatically increased, and Listeria ranks among the best-studied pathogenic bacteria.

Can you tell us a little bit about your present work at EMBL?

I am at EMBL Heidelberg as a visitor in the laboratory of Nassos Typas, within the Genome Biology Unit headed by Eileen Furlong, and I am also helping to promote EMBL’s new strategic programme initiated by Edith Heard. My competence in microbiology and infection biology should help especially in the transversal themes ‘Microbial Ecosystems’ and ‘Infection Biology’, as well as in ‘Human Ecosystems’ and ‘Planetary Biology’. I will, for example, participate in various orientations and interviews for recruitment.

I also am continuing a little project linked to my previous work at Institut Pasteur, Paris. I am interested in understanding the role and function of a Listeria bacteriocin which specifically kills a commensal bacterium, Prevotella copri, in the gut. The new Imaging Centre and the Electron Microscopy Core Facility should be of great help in this enterprise. “

I am also looking forward to working more closely with the Directors’ Research Unit in the future.

When did you first decide you wanted to be a scientist, and what triggered that decision?

I decided I wanted to be a scientist when I got my first book of chemistry at the age of 13. I was instantly fascinated! For me, it was like the discovery of a world I had been totally unaware of until then.

What, in your opinion, are some of the most pressing questions currently in the field of infection biology research?

To begin with, previous studies have mainly analysed pathogens in isolation. It is now important to integrate our knowledge of the specific roles and properties of infectious agents with that of the microbiomes and the host. We now have the tools to study in great detail how pathogen components interact with host cells and tissues, dealing with other microbes also living there. In addition, this has to be done at the single-cell level with natural isolates and not with strains grown in the laboratory for years.

New tools also allow us to understand all the steps of the infection process from the very beginning to disease onset. And for all pathogens, it is important to understand critical traits that lead to specific clinical features as well as to identify what roles different commensals play within various microbiomes during infection.

Of course, other important questions in infection biology include generating new antimicrobials, including new antiviral, antibacterial, antifungal, and antiparasitic drugs, as well as new strategies to combat antibiotic-resistant strains. We also need vaccines for many diseases, and the new mRNA technology may lead to enormous progress in this area.

Finally, we need to understand better how transmission occurs. This is why the notion of ‘One Health’ has emerged. Scientists studying human infectious diseases need to work in collaboration with veterinarians and environmental scientists.

Who are some of the people who have inspired you during your scientific journey?

I have picked up millions of little ‘things’ from a lot of people, starting with my PhD advisor, Georges Cohen, who gave me complete freedom. Julian Davies advised me to try to have enough money to be able to do risky experiments. A friend once told me: you will be ‘judged’ mainly by your publications, so I always gave priority to reading and correcting the manuscripts prepared by the people in my lab.

How did your interactions with EMBL begin, and what do you like best about its culture?

My interactions with EMBL started in the late 1980s, when I began to investigate Listeria-cell interactions. I met EMBL researchers, such as Kai Simons or later Tony Hyman, in symposia or scientific meetings. In addition, at Institut Pasteur, I interacted closely with scientists like Daniel Louvard, who had worked at EMBL for years prior to Institut Pasteur.

EMBL regularly invited me to give talks, and after one, Nassos Typas and I decided to organize a meeting together, titled ‘New approaches and new concepts in microbiology’. We have been repeating it every other year since 2013. I have also known Edith Heard for many years because she has long worked in Paris, first at the Institut Pasteur, and then at the Curie Institute. So, I am clearly not in terra incognita here!

What I like best about EMBL is how teams are made of young people willing to collaborate. They openly exchange ideas and discuss results. EMBL also maintains a high quality in its science and the associated cutting-edge technologies. 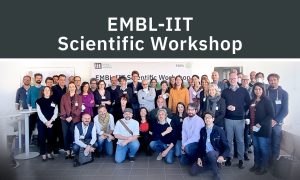 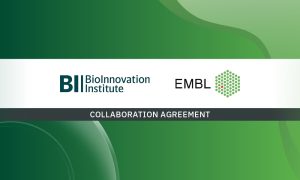 Teamed up to innovate