The skin seems almost designed to thwart established microscopy techniques, but a new approach by scientists at EMBL Monterotondo overcomes such challenges, showing mouse neurons as never before.

“Already we’ve been able to see things that we couldn’t see before. Structures such as nerves arranged around a hair on the skin; we can now see them under the microscope, just as they were presumed to be,” says Paul Heppenstall of a new technique developed by his lab.

The technique, called SNAP-tagging, relies on a small protein that binds to a specific small chemical structure – and once bound, it won’t let go. Guoying Yang and Fernanda de Castro Reis in the Heppenstall lab genetically engineered mice so that their cells would produce that SNAP protein. They then used fluorescent probes that contain the small chemical that SNAP binds to, and injected them into the mice. SNAP acts like an anchor, glueing the probes in place for researchers to follow under the microscope. The approach had been used for about a decade in studies using cell cultures – cells grown a lab dish – but Heppenstall’s group is the first to apply it to neurons in living mice. Very often, expanding a technique from lab dish to live animal presents a whole host of challenges, as a mouse is much more than just a group of cells. But with SNAP, the scientists found, mice actually eliminate a significant hurdle themselves.

“If we’d gone straight for the mouse, there would have been fewer challenges!” Heppenstall says with hindsight. “But we tried to do everything step-by-step. So we started with cell culture, and found that the probes are very sticky – you have to wash the cells repeatedly to get rid of tags that are floating around, not attached to SNAP, before you can see anything. Then we took tissue from animals, and tried to label that, and they were still sticky. And then finally we got around to injecting into the mouse – and it just worked! It turns out that the mouse is very good at washing out what it doesn’t need – so all the probes get washed out, except the ones bound to SNAP.”

finally we got around to injecting into the mouse – and it just worked!

The will to keep trying to find ways to make the strategy work was driven by the Heppenstall lab’s particular interest: the nerves in the skin. Even though they are all over our bodies, and skin samples are relatively easy to maintain in a lab dish, these nerves are actually incredibly difficult to study under the microscope. The skin has properties that almost seem designed to thwart conventional microscopy approaches. Under blue light, it naturally glows green, so attempting to label any structures – like nerves – in the skin with fluorescent proteins has an obvious hitch: it’s hard to distinguish between the glow from your labels and the skin’s own. The alternative approach would be to use antibodies – molecules our immune system uses to identify invaders, and which can be co-opted to home in on and tag particular structures. But the skin’s main function is to be a barrier, to protect us from the outside world. So it is very impermeable, which means it’s very difficult to get large molecules like antibodies through.

SNAP-tag overcomes these problems, as it allows researchers to use virtually any labels they want, including artificial dies of different colours that stand out from the skin’s background glow, and are small enough to make it into the skin. And because these are artificial, custom-made probes, they can be designed to do more than just highlight particular structures. You can have probes that destroy certain structures or cells, for instance. As Heppenstall puts it, “with SNAP-tag you can do almost anything, as long as the chemistry to make the probe is possible.”

That joining of forces between experts in biology and in chemistry is essential to develop and expand approaches like SNAP. Chemical biologist Kai Johnsson and his lab at the École Polytechnique Fédérale de Lausanne (EPFL), in Switzerland, were instrumental in this work. And Yang’s postdoc position is shared between the Heppenstall lab and Carsten Schultz’s group at EMBL Heidelberg, which focuses on chemical biology. The two EMBL groups are continuing to explore SNAP-tagging’s potential, looking to develop tags to see the unseen.

Ultimately, Heppenstall wants to record activity in individual neurons. He’d like to move a hair on a patch of mouse skin, or change the skin’s temperature, and watch that information flow through the nerve, to the next nerve, tracking it throughout the whole network. In principle, he speculates, you could do this in a whole brain, or a whole animal. It would be like a taking a scan and zooming in to see what’s happening inside each nerve cell.

Right now, Heppenstall and colleagues are simply delighting in their new-found detail. “The first thing we’re doing is just exploring in more detail – going to higher resolution and just looking to see which nerves go where. In the future we hope to use this as a map when assigning functions to different neurons, to understand more about how our sense of touch works.” 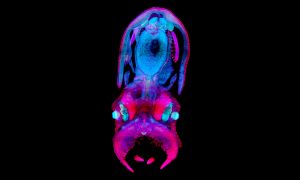 The secret life of baby octopuses

Vision unveiled: new roles for the retina in visual processing

3D-Beacons Network: protein structure data, all in one place