In human cells, the genetic material is packaged into 23 different DNA molecules, the chromosomes. Each chromosome is present in two copies, one inherited from the paternal sperm, and the other from the maternal egg.

During most of the cell’s life, chromosomes take the shape of long, spaghetti-like molecules intertwined with each other. However, before and during cell division, chromosomes undergo drastic structural changes and follow a finely choreographed dance.

First, each chromosomal DNA molecule is duplicated, to copy the genetic blueprint for the next cell. Ring-shaped protein complexes hold these copies, called chromatids, together. Other protein complexes then help them fold up into distinct chromosomes with the distinc X-shape. Being packaged like this allows each chromosome to move through the viscous cytoplasm of the cell without getting lost or entangled.

The fully folded, duplicated chromosomes then line up in the middle of the cell, ready for the final act. The rings that hold sister chromatids together break, and the chromatids are pulled apart, drifting to opposite poles of the dividing cell in a synchronized manner, so that each daughter cell receives its own complete set of chromosomes.

In this confocal image taken and edited by Arina Rybina from the Ellenberg group, two fluorescently labelled chromosomes swirl inside a living human cell, on their way to align with other chromosomes. DNA appears in magenta and the large protein complexes involved in chromosome folding are in cyan.

If you have a stunning picture of your science, your lab or your site, you can submit it here. 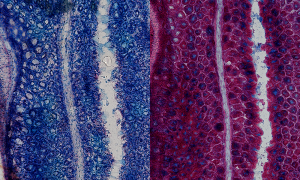 Spotlight: Colours of the colon 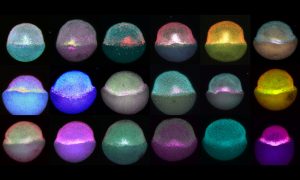 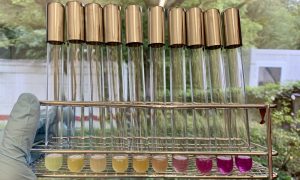