Manfred Lautenschläger began his career by selling insurance to university graduates, and in 1971 he co-founded the financial services company Marschollek, Lautenschläger und Partner AG, soon becoming one of Germany’s most successful businessmen of the time. In 1999, he retired from business operations and set up the Manfred Lautenschläger-Stiftung, a foundation that supports numerous philanthropic projects around the world. In 2018, Manfred Lautenschläger received the Honorary Membership of the Friends of EMBL; a group that supports research at EMBL through private donations. The EMBL Lautenschläger Summer School has been made possible thanks to his generous support. Here, he reflects on his code of conduct as a donor.

What motivated you to fund the EMBL Lautenschläger Summer School?

I’ve always admired young people’s energy and enthusiasm. When I heard about the summer school, I thought: “Great! I will support that.” Now there are applications from all over the world – the demand is huge. Giving young people some guidance, that feels great.

Is there a code of conduct that you follow when donating?

Yes, certainly. My foundation is very broadly oriented. One focus is promoting understanding among people. I built the Heidelberg-Haus in Crimea, where older women that were kidnapped as young girls by the Nazis can meet and receive medical attention. I’m part of the board of trustees of the Documentation and Cultural Centre of German Sinti and Roma in Heidelberg, and honorary senator at the Centre for Jewish Studies Heidelberg. Science is very important to me, along with cultural events like the Heidelberger Frühling, now the third largest classical music festival in Germany, or Enjoy Jazz, the largest jazz festival in Europe. These are all things that I can promote as a donor. Where the public sector is not willing or able to get involved, there is a lot that can be done with selective funding. It is important for me to decide for myself whom I support. I want to know the individual projects.

Is there a code of conduct that you expect from the institutions you support?

I think that science should be free. I don’t control anything. I take a look at the people beforehand and ask myself: are they really passionate about their work? How trustworthy do they seem? That’s important. And I’ve never been disappointed. A scientist must work freely, and also has every right to fail.

How did you decide to start your foundation? Was there a key moment?

Not a key moment, no. I had become very rich, a billionaire. That is not the case any more, but I am still wealthy. I do not need all that money, my children do not need all of it, because they are all self-sufficient. So, it seemed natural to use it for the common good. That has rewarded me greatly, because I got in touch with people who I would never have met otherwise: scientists, artists, and getting to know the world of the Sinti and Roma, or the Crimean Peninsula. This has made my life beyond 60 as exciting as my professional life was. I can imagine few countries in which I would have been as successful as in Germany. I’m committed to contributing to the preservation of what we have here. I think it is an obligation, for people who can afford it, to contribute to this.

From 15–26 July 2019, undergraduate students from scientific fields outside biology will learn about current research in the life sciences. This year’s focus will be on the possibilities for high-end imaging to contribute to new insights in a broad range of areas such as cell biology, developmental biology, genome biology and neurobiology. Manfred Lautenschläger’s donation will support the Summer School for five years, beginning in 2019. 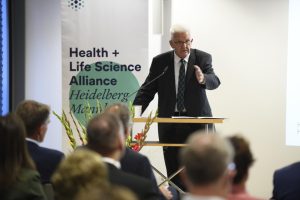