Edit
To know, to think, to dream. That is everything. – Szilárd Library

To know, to think, to dream. That is everything.

“Savoir, penser, rêver” is the book where twelve renowned French researchers, among which EMBL DG professor Edith Heard, described their vision of the world. The title came from Victor Hugo’s quote “To know, to think, to dream. That is everything”. With those words reflecting the scientific state of mind, we introduce the EMBL Szilárd library holdings in honor of the International Day of Women and Girls in Science on 11.2.2022. 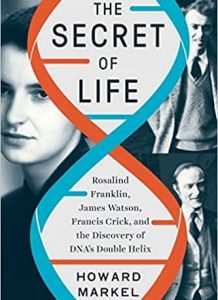 There are biographies like “Scientists Anonymous” in the library collection, with stories of famous and less known women scientists from the 17th century to the modern era, whose discoveries had a significant scientific impact. “The Secret of Life” brings new insights into Rosalind Franklin’s role in the discovery of DNA’s double helix, “A feeling for the organism: the life and work of Barbara McClintock“, life histories of Marie Curie, Florence Nightingale, Margaret Dayhoff, Mina Bissell.

The value of these works is not only in celebrating heroines of science but also in bringing to attention the thorny path that female scientists are going through even nowadays. Librarians have recognized this in modern society worldwide. Back in 1989., The Library of Congress Subject Headings, the central authority for a controlled vocabulary of bibliographic records, introduced “Sexism in science” as a subject heading. (For non-librarian readers, a subject heading is an authorized word or phrase contained in a controlled vocabulary accepted after a procedure led by the subject specialist librarians).

This subject heading we have assigned to another book in the collection, “Why science is sexist“. Here, author Nicola Gaston points to various malpractices, “from under-representation of women to the argument that mental capabilities are gendered and warns of the damaging consequences for science and society.”

EMBL Szilárd library will continue to collect the works on this topic and hopefully contribute to the changes for the better. Now, we are expecting our copy of a recent publication about women scientists at the MRC Laboratory of Molecular Biology (Ahead of the Curve, Cold Spring Harbor Laboratory Press 2021). We also hope that this time, next year (or in the next few), we will be reading the “Women Scientists at EMBL” book.