This facility provides services for analysis of metabolites and lipids. 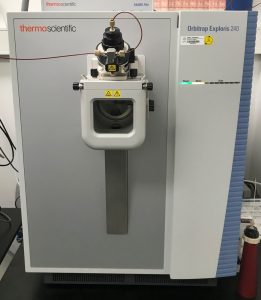 Advanced hybrid quadrupole-Orbitrap mass spectrometer with high resolution up to 240,000, fast scan speed, enhanced robustness and mass accuracy (<1ppm), and HCD fragmentation. This HRMS system can be coupled either to UHPLC or to direct infusion for applications such as detection, identification, and quantification of small molecules, metabolites, and lipids (Services). 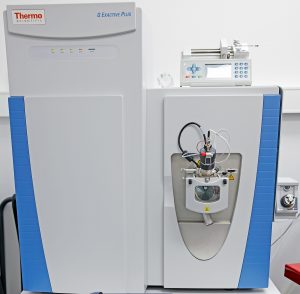 Advanced hybrid quadrupole-Orbitrap mass spectrometer with high resolution up to 280,000, fast scan speed, and HCD fragmentation. This HRMS system can be coupled either to UHPLC or to direct infusion for metabolomic applications such as detection, identification, and quantification of small molecules, metabolites, and lipids (Services).

This system is especially good for untargeted analysis of metabolites and lipids in the discovery phase. 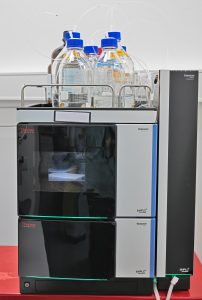 Advanced ultra-high performance liquid chromatography (UHPLC) system. With its increased maximum pressure (up to 1500 bar) and biocompatible system design it can be utilized for a wide variety of separations of small molecules, metabolites, and lipids, used in combination with HRMS. 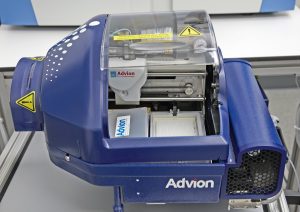 NanoChip-based electrospray ionization technology which combines LC, chip-based infusion, fraction collection, and direct surface analysis with the mass spec (Q-exactive plus) into one integrated system. It improves the high throughput and sensitivity of the analysis. 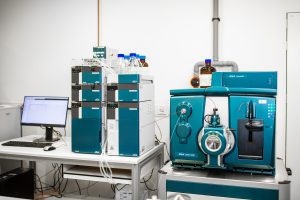 Triple Quadrupole with and Ion Trap (QTRAP 6500+ from Sciex)

This instrument has fast scan speeds for high-throughput analysis with millisecond polarity switching. This mass spectrometer has several targeted capabilities including multiple reaction monitoring (MRM) for quantitation of metabolites and lipids), constant neutral loss (CNL), and a precursor and product ion scans. This mass spectrometer also has MS3 capabilities for the qualitative analysis of metabolites and lipids.

The QTRAP system in the facility instrument can be coupled to either an LC (Exion) and to a differential ion mobility spectrometry (DMS) device.

This instrument is particularly good for hypothesis-driven studies, for analysis of low concentration metabolites, and for metabolite quantitation.

Extracellular Flux Analyzers simultaneously interrogate the two major energy-producing pathways of the cell mitochondrial respiration and glycolysis in a microplate, in real-time.

The DMS is used for separating isomers and isobars that are difficult to distinguish using LC and MS alone. It is also used for reducing chemical background noise thus improving limits of detection and thereby enhancing the sensitivity of the mass spectrometer.

Mode of operation: The DMS cell separates metabolites and lipids ions in the gas phase. DMS consists of two parallel electrode plates and it separates the ions using an asymmetrical RF field -alternating between high and low fields in opposite polarities ─ applied to the two plates. Ions are carried through the plates by a carrier gas. The separation of the ions can be enhanced using a volatile chemical modifier (e.g. methanol, isopropanol).

The DMS in our facility is used with a direct infusion into an MS (high-throughput analysis), or it can be coupled to both the LC and MS (LC-DMS/MS) to provide orthogonal separations and for analysis of complex samples.