The Barabas group uses structural, biochemical and cell biology approaches to investigate how DNA rearrangements are carried out and regulated, using this knowledge to advance applications in research and medicine. Edit 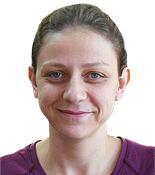 Our research focuses on transposons, mobile genetic elements that can autonomously move from one location to another in the genome. Transposons constitute a large fraction of most genomes, but their mechanisms and physiological roles are just starting to be unravelled. They drive genetic diversity, adaptation and evolution, and recent discoveries show that they have key functions in gene regulation, development, immunity, and neurogenesis. In bacteria, transposons largely contribute to antibiotic resistance spreading, creating a pressing public health concern. Moreover, these ‘jumping’ DNA elements offer innovative tools for genetics research and human gene therapy.

To better understand transposons and facilitate their applications, we study the molecular mechanisms of their movement and regulation using a diverse methodological toolbox including structural biology, biochemistry, biophysics, bioinformatics, microbiology, and cell biology approaches. We want to learn the structure of functional transposition complexes, the chemistry they use to cut and paste DNA, the principles of their target choice, their distribution in genomes, and their interplay with the host cell. Major focus is on transposons that provide genetic tools, on antibiotic resistance-carrying elements, and on transposon-host interactions.

This transposon is a prime tool in vertebrate genetics and human gene/cell therapy. We study its structure and mechanism, investigate how it interacts with other components of human host cells, and develop advanced variants for genome engineering applications. We have recently determined the crystal structure of the catalytic part of the Sleeping Beauty transposase and used it to develop novel hyperactive variants, demonstrating the power of structure-based design for generating tailored transposases (Voigt et al., 2016, Press Release: Designing gene therapy).

In genetic engineering, site-directed integration of a genetic cargo is often desired to minimize adverse effects in the target cells. Our previous work revealed that the IS608 transposon uses part of its own sequence to guide integration to a specific site via DNA base pairing (Barabas et al., 2008). We have recently also shown that its target recognition can be programmed to select unique genomic sites (Morero et al., 2018) and we are currently testing the applicability of this approach in diverse cellular backgrounds.

The spread of antibiotic resistance is one of today’s biggest global health challenges. Conjugative transposons (CTns) actively transfer resistance genes between bacteria, largely contributing to resistance dissemination and multidrug-resistance development. We study the mechanisms of CTn movement at atomic detail and in bacterial communities with the ultimte goal of desiging intervention startegies to limit their spreading. We have recently characterized a vancomycin resistance-carrying CTn from Enterococcus, elucidating how its structural features allow it to insert into diverse genomic sites, expanding gene transfer. This work also provided antagonists that interfere with the transposase-DNA structure to block transposition (Rubio-Cosials et al., 2018, Press Release: Potential new way…).

To avoid deleterious outcomes, cells keep their transposons under tight control. A major control mechanism is provided by small RNAs and our group investigates these processes in prokaryotes (Schulz et al., 2017) and eukaryotes (Voigt et al., 2012).