With scientific meetings and conferences brought to a halt by the coronavirus pandemic, conference organisers and scientists are switching to alternative forms of communication. At EMBL Heidelberg, the EMBO | EMBL symposium ‘The Four-Dimensional Genome’, which had been planned as an on-site meeting, became the first virtual conference of the EMBL course and conference programme from 30–31 March.* Here, Jürgen Deka, Head of External Scientific Training, discusses how he and his team overcame the organisational challenges.

How was the meeting structured?

We hosted four virtual sessions with 13 live talks from our invited speakers. Participants could send their questions in real time to the session chairs, who would then ask the speakers. The sessions also included 20 pre-recorded short talks, and we used a virtual gallery system that made posters available to view online. For ‘Meet the Speaker’ and ‘Meet the Editor’ events and discussions about posters, we used the Slack app. We expected 250 pre-registered attendees, but by re-opening registration for the virtual conference we attracted nearly twice as many participants.

What were the major challenges?

The most difficult process was adapting the meeting agenda for different time zones. We set up the conference in a way that allowed speakers and audiences in Europe and the eastern part of the USA to attend conveniently, since all our live speakers were based in these regions. The meeting had to be condensed significantly, from three and a half days to only two half-days. The technical aspects of broadcasting the conference were challenging as well. At peak times, 470 participants accessed the live stream simultaneously, so we had to adjust bandwidths during the meeting. The EMBL Photolab team, our conference officer Tim Nürnberger, and the conference organisers did a fantastic job and made all of this possible at short notice.

How was the idea of arranging a virtual conference received?

Our speakers were very supportive and appreciated that we made the conference happen in this form. We received similar feedback from the scientific organisers and the audience. On Slack, many participants started their comments by thanking us for keeping scientific exchange alive during these difficult times. There was also active participation in the discussions. We received questions from all over the world, and the discussions on Slack worked well, too. Of course, an app does not replace face-to-face interactions entirely and can make some discussions more difficult. We’re currently figuring out how this can be improved in the future.

What virtual conferences are you planning to host next?

From 18–19 May, we’re hosting the EMBL conference ‘BioMalPar XVI: Biology and Pathology of the Malaria Parasite’, and we hope to reach additional audiences in African countries with the online format. From 3–6 June, we’ll have the EMBO | EMBL symposium ‘Microtubules: From Atoms to Complex Systems’. For each event, we need to tackle the difficulty of combining various time zones again. Of course, Europe and the eastern part of the USA represent only part of the scientific world. We have to find ways to include speakers and participants in regions such as Asia and the western states of the USA as well.

Do you plan to use methods for virtual participation more in future?

Absolutely. Finding ways to reduce CO2 emissions is an important topic at EMBL and in the conference world in general, and enabling remote participation is an important step. Conferences can include live-streamed talks from speakers who are not present on site, and we can stream local conferences to participants around the world. This is much more than just a backup solution for the current situation – it can open up totally new perspectives and bring more people together. Our preparations for this were already under way – the coronavirus pandemic simply forced us to be faster in implementing these concepts.

Is virtual participation also an option for training courses?

We’re currently looking into this as well. For lecture-based formats it’s certainly possible, but it would be much more interesting if we could include practical activities, too. For example, it might be possible to use electronic glasses to transmit the perspective of an experimenter to the audience. We’re also looking into ways of giving remote training to people in a laboratory setting. But, for these things, we will need to be back on campus ourselves – they’re not an option until then.

* After the publication of this article, we learnt that an EMBL PhD Symposium took place as an online meeting in December 2006. We have therefore modified this sentence to reflect the fact that this virtual conference was the first of the EMBL course and conference programme.

Blog post from the conference organisers on the organisation process

Science for all: the origins of Native Scientist

Annual Reception 2020: An evening with friends 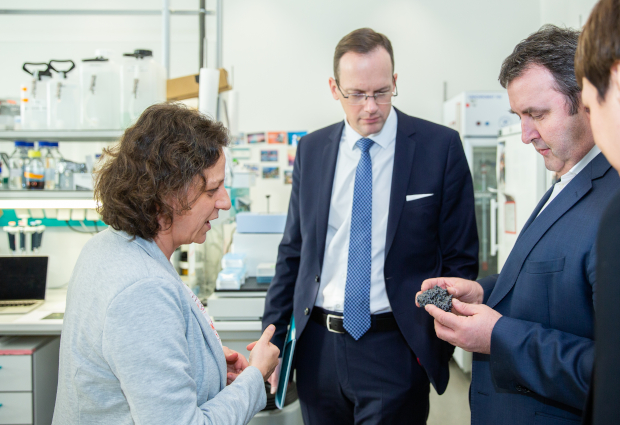 Picture of the week
Organelles in space

This image is a 3D-rendering of the automatic segmentation of a HeLa cell, made by Julian Hennies from the Schwab team at EMBL Heidelberg.