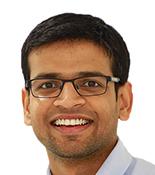 Ubiquitination of proteins is involved in virtually every cellular process including protein turnover, DNA-repair, cell-cycle, vesicular transport, autophagy and innate immunity. Ubiquitination proceeds through a universally conserved process involving 3 enzyme families (E1, E2 and E3) and ATP resulting in the attachment of the C-terminal carboxyl group of ubiquitin to a lysine residue in substrate protein via an isopeptide bond. Recently, a string of exciting studies have shown that the SidE family of toxic proteins (SdeA, SdeB, SdeC & SidE) from pathogenic Legionella pneumophila can attach ubiquitin to substrates independent of E1, E2 enzymes (Qiu et al., 2016; Bhogaraju et al., 2016). My postdoctoral work has elucidated the comprehensive mechanism of SdeA-mediated ubiquitination wherein the mono-ADPribosyl transfer (mART) domain in SdeA ADPribosylates ubiquitin on Arg42. This is followed by phosphodiesterase (PDE) domain-driven cleavage of the pyrophosphate bond between α and β phosphates of ADP-ribose, linked to ubiquitin. The PDE reaction is accompanied by the attachment of ubiquitin to serines of target substrates by a phosphoribosyl linker on Arg42 (Bhogaraju et al., 2016) (Figure 1). This unique bridging of ubiquitin to substrate protein involves a phosphodiester bond instead of the canonical isopeptide bond. These studies have opened an exciting new facet of ubiquitin biology that largely remains to be explored.